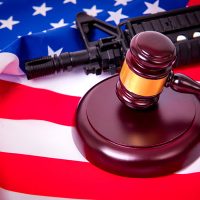 The Nevada Supreme Court recently upheld the prevailing law concerning the liability of gun manufacturers for massacre lawsuits. There are a number of issues that can be addressed in this article, but the most interesting is the fact that the promoting company that hosted the Las Vegas concert massacre is the same promoting company that hosted the fatal Travis Scott concert. In fact, that promoting company has years of fatal concerts to its credit and is the most likely target for personal injury lawsuits stemming from the Travis Scott concert. Much like the gunmakers who provided the shooter with his weapon, Scott may be immune from lawsuits emerging from performative utterances.

Gun manufacturers cannot be held liable for the criminal conduct of an individual who uses their gun to commit a crime. There is no basis in law for holding a company responsible for the intentional use of their product. In the same manner, it would be impossible to hold a hammer company responsible for any injury caused by a hammer-wielding assailant. While personal injury attorneys have attempted to craft creative arguments holding gun manufacturers for the conduct of their customers, no such argument has been able to subvert U.S. laws restricting such lawsuits.

Live Nation, the promoter responsible for both the Travis Scott mass casualty event and the Las Vegas mass casualty event are both likely to become the subject of personal injury lawsuits. It would not be the first time this particular company had organized an event that led to either stampede deaths or terrorist-style attacks. Since there is an established pattern of negligence associated with this promoter, the injured parties and grieving relatives can claim that the promoter failed to take reasonable precautions to keep the crowds in both events safe. The same company has already faced similar lawsuits and settled.

So, with a history of promoting events that resulted in stampede deaths and terrorist attacks, the promoter is likely to face serious liability for the Travis Scott situation, while it remains difficult to prove that a performer is “inciting” a crowd during performative utterances. The defense will claim the defendant was “exciting” the crowd, which is his job. They will lay the blame squarely on the promoter which failed to account for possible injuries, which is their duty under the law.

If you’ve been injured at a public event, there is a chance your injury was caused due to negligent security or negligent preparation of the event. Call the Miami personal injury attorneys at the office of Alan Goldfarb, P.A. today to schedule a free consultation and we can begin planning your next moves today.