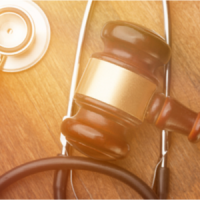 A former New Orleans Saints’ cornerback has filed a lawsuit against the team’s doctors after they misdiagnosed a leg injury that led to the worsening of his condition. The case became a national headline after it was announced that the Saints fired the orthopedists who had misdiagnosed the player. Now, Devin Breaux blames the doctors for shortening his career and robbing him of some of his best playing years. Below, we’ll take a look at the anatomy of this lawsuit.

This is, essentially, a medical malpractice lawsuit filed against the team and the doctors that they employed. Breaux says that the misdiagnosed a fractured fibula as a bone contusion. The  Ochsner Health System claims that they reviewed the case and found no evidence of misdiagnosis. They further claim that the allegations are unfounded.

Does the fact that the injury turned out to be a fractured fibula impact the defendant’s position? It does, but not as much as you might think.

For a medical misdiagnosis case to be successful, the plaintiff must show that the doctor failed to ever consider the correct diagnosis, or considered the correct diagnosis, but eliminated it on the basis of bad medical reasoning. Often, when a doctor is confronted with two possibilities (say bone contusion or fibula fracture) it would behoove them to err on the side of caution to prevent further injury to their player.

To win a medical misdiagnosis case, you must be able to show that the doctors failed to render the prevailing standard of care in reaching the diagnosis. Sometimes, this is harder than others. While one might expect that a bone contusion can look similar to a fracture on an X-ray, if that fact is known, then the doctors would want to eliminate the more serious diagnosis before recommending that a player continue to engage in his physically grueling work schedule. In this case, the doctors failed to ensure that the player was safe to practice, and that cost him the rest of his season and led to him winding up in the CFL.

The defendant is eligible to receive his prorated earnings during the course of his career making this lawsuit potentially damaging for the named defendants. Football players make a lot of money.

The Miami personal injury attorneys at the office of Alan Goldfarb, P.A. files lawsuits against negligent medical doctors who fail to render the prevailing standard of care for their field. If you’ve recently sustained injury after a medical procedure, call our office today and we can help you recover damages related to your injuries.

By Alan Goldfarb, P.A. | Posted on May 9, 2021
« Qualified Immunity and Police Brutality
Broken Asphalt Results in Trip and Fall Lawsuit »