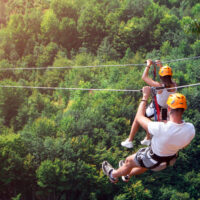 An outraged mom has filed a lawsuit against Urban Air Trampoline and Adventure Park and their parent company UATP Management after her son fell from a zipline attraction at his friend’s birthday party. The ride is a zipline-like ride called Sky Rider. According to the plaintiffs, the boy fell out of his harness and had to be airlifted to Tampa General Hospital. The boy suffered numerous broken bones, a collapsed lung, and a brain injury. The full extent of his injuries is not currently known.

The boy’s resilience, however, is remarkable. His mom reports that he is now back to school, but he struggles with everyday tasks that other children take for granted.

The Bureau of Fair Rides conducted an investigation shortly after the incident occurred and concluded that the equipment itself was not deficient, but that operator error was to blame for the accident. In other words, the boy was not harnessed properly before he went on the ride.

Urban Air has responded only to say that the employee who was operating the ride is no longer with the company and they have retrained staff on the proper way to harness children on their rides.

Obviously, when something happens on a ride at an amusement park, the park can be held liable for the injury and that’s precisely what’s going to happen here. The question is: How much will the family be able to get from this lawsuit? That will depend entirely on the extent of the boy’s injuries. Obviously, he’s suffered quite a bit and deserves to be compensated for that suffering. The family has incurred serious medical costs related to multiple surgeries and it is unknown whether or not the boy’s injuries will be permanent or will heal in time.

Moreover, the negligence of the employee in harnessing the child during the ride is also something that the amusement park would be liable for. It goes without saying that employees need to be properly trained when it comes to ensuring the safety of their guests and this is no exception. That the boy fell during a birthday party in front of all of his friends and had to be airlifted to a nearby hospital is also something that the amusement park will have to pay for.

To their credit, they appear to be taking responsibility for the incident and doing whatever is in their power to prevent a similar incident from happening again. A six- or seven-figure settlement number doesn’t appear outside the realm of possibility. Everyone is very lucky that the boy managed to survive the incident.

If you’ve been injured at an amusement park or other public place, the Miami personal injury attorneys at the office of Alan Goldfarb, P.A. can help you recover damages related to your injuries. Talk to us today for a free consultation and we can begin preparing your case immediately.