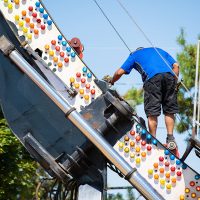 Four years ago, an Ohio teen lost his life when the arm of one of the carnival’s rides snapped, sending the teen flying to his death. It turned out that the steel arm of the attraction had corroded through—enough so that when the ride was in motion, the arm snapped off. The centripetal force of the circular ride sent the teen careening through the air. Four others were left with life-altering injuries.

Now, four years later, Ohio is imposing stricter regulations on carnival rides. This includes mandatory inspections related to rust and metal fatigue. However, the carnival industry says these requirements are overreaching and can result in shutting down otherwise safe rides. This has caused some carnivals to pull out of Ohio’s festival circuit while others are considering doing the same.

In the incident described above, inspectors had cleared the ride only hours before the catastrophic accident occurred. After the incident, the maker of the ride said that years of undetected corrosion weakened the arm causing it to break off while the ride was in motion. Attorneys for the victims blame the inspector for clearing the ride only hours before it suffered a catastrophic failure.

Thus far, several lawsuits have been filed in the incident. They name the ride’s owner, manufacturer, and two private inspection companies for failing to catch the damage. However, most states prohibit negligence lawsuits against state employees. Nonetheless, it remains unclear what good enhanced inspections will do when inspections appear to have failed in the first place.

Nonetheless, the government’s answer to every question is more government. The legislation, which is named after the victim, will impose stricter rules on carnivals to ensure that travel and maintenance records are kept and updated. Each ride will thus have a history.

Problems with the new law

Inspectors are being asked to “check a ride’s components” and “err on the side of caution.” The side of caution, however, is not to allow any rides whatsoever. In fact, inspectors can likely find something wrong with just about any ride. This leaves carnival owners and operators wondering whether or not they’ll have specific attractions prior to setting down. In cases where they can’t feature a specific ride, they may lose revenue. In this case, the uncertainty surrounding the situation makes it riskier for carnivals to work a circuit in which they can get shut down by the opinion of a government employee who has been told to err on the side of caution. Further, the new law does not address the regulatory failures that resulted in the boy’s death. It only imposes new, stricter regulations.

Talk to a Miami Injury and Negligence Attorney

If you’ve been injured on an amusement park ride, call the Miami personal injury attorneys at the office of Alan Goldfarb, P.A. today to schedule a free consultation and discuss your situation in greater detail. We can help you recover damages including lost wages, past and future medical expenses, and reduced quality of life. Call today!