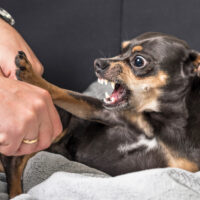 So, anyone with a mental health diagnosis or “emotional disability” can register an animal as an emotional support animal without it ever having received any specific training to serve to provide emotional support.

This is, for obvious reasons, vastly different than a “service” animal. In fact, those with psychiatric diagnoses can find service animals who do provide some legitimate aid to those who care for them.

Service animals are not considered pets under the law. They are somewhere between pets and medical aids. The most common example is the seeing-eye dog. These dogs are trained to provide a service to the blind. Landlords are required by law to provide concessions to those with registered seeing-eye dogs or other legitimate service animals. In some cases, so are restaurants, buses, and other public places.

The same is not true for emotional support animals. While some city ordinances may require landlords to allow these pets, they do not have the same level of protection that service animals do. Logistically, any restaurant, airport, or landlord can refuse the entry of an emotional support animal. That is important because it brings into question Delta’s liability.

Delta has no requirement to allow emotional support animals aboard flights. Since these animals have no qualifying training, they are not even remotely similar to service animals. Delta could, therefore, refuse to allow emotional support animals on flights and treat them as they would any other pet. Because they failed to do that, a man was attacked and suffered serious injuries as a result of that policy.

According to the lawsuit, as the man was attaching his seat belt, the animal began to growl at him. The dog, which was small enough to fit on the passenger’s lap, “attacked his face”. After the incident made national headlines, many airlines were forced to review their policy concerning both “emotional support animals” and service animals, which is a major problem for those who rely on service animals and ensure that they have the correct training. The damage to the man’s face was so extensive and the bleeding so profuse that an entire row of seats had to be moved away from the blood. The man also required 28 stitches.

If you’ve been injured by an emotional support animal or any other kind of animal, you can recover damages related to your injuries. Talk to the Miami personal injury attorneys at the office of Alan Goldfarb, P.A. for more information on your case.